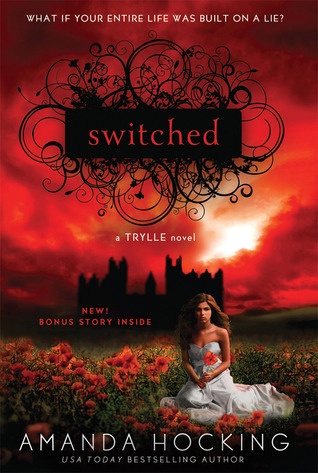 Format: ebook (although I did buy the trilogy in a bind-up shortly after reading this).
Source: Scribd/Half Price Books
Book rating: ⭐⭐⭐⭐⭐
Genre: Young Adult Fantasy/Romance

Well, I can honestly say that this book was a first for me. It centers around a magical creature I don’t read about often in books; even in the fantasy genre: Trylle or more commonly, trolls. Not your average ugly bridge trolls, no, think more along the lines of Kristoff’s family in the movie Frozen only more humanoid.

This story follows Wendy, whose mother attacks her on her 6th birthday because she is convinced that she is a monster and is not her biological child. It just so happens that she is right – Wendy is a Changeling. She is actually a magical creature called Trylle. She is tracked down by Finn and brought back to live with her biological mother in the Trylle community.

What I liked: It is so great to read a story about a type of magical creature you don’t often read about. The trolls all have different magical abilities in varying degrees. The main character, Wendy, has the power of persuasion. I liked Wendy as a character and I really felt her frustration being thrust into a completely different culture from the one she grew up in. I also really liked Finn, Rhys, Willa, and Rhiannon. They were great secondary characters and good friends to Wendy.

This story was also set in Minnesota by a Minnesota author which I always appreciate, however, it was barely touched on in the story and could have been set literally anywhere. The world was beautiful, but had little in the story to tie it to Minnesota.

What I disliked: They kept a lot from Wendy; things she deserved to know. This trope can sometimes get tiresome. She was asking really good, pertinent questions and frequently got brushed aside.

Also, Wendy has her own abilities and the Trylle around her seem to be impressed by her power, however, when her christening is attacked by a rival group; she criticizes the gentry’s lack of ability or willingness to fight off the attackers, yet she does little to utilize her own powers in order to fight back herself.

This was a book that I think was unique in it’s own way. I am excited to continue on with the trilogy.